This blog may well take on something of a nautical air in 2017. Last year I shared some renders of various vessels that I’d been playing around with in Blender. These were all 1:600 scale since I felt that was a good size to let me get enough details in. After a few Shapeways experiments I decided that this was a little too large – when I wanted to make some big ships they were going to start getting seriously expensive!

I’ve therefore re-worked a few of my designs into 1:900 scale to see whether I can retain a reasonable amount of detail in this more cost effective size. This was slightly more work than just shrinking the original designs since I had to respect design rules such as minimum wall thickness, but fortunately it wasn’t too much effort to work with my saved Blender files.

It also occurred to me that I could also try printing some sea bases in the low cost ‘strong white flexible’ material that Shapeways offer. This material has a rough finish that is unsuitable for high quality miniatures, but I thought it could work nicely for drybrushing a base.

This is the smallest of the Elven vessels that I have planned, mounting a single bolt thrower in the bows and a magical obelisk at the stern. The miniature is about an inch long, so it’s fairly dimunitive! I elected to print the ship as a single piece, but if I want to go down the casting route in future it would need to be in two pieces (hull and sail). 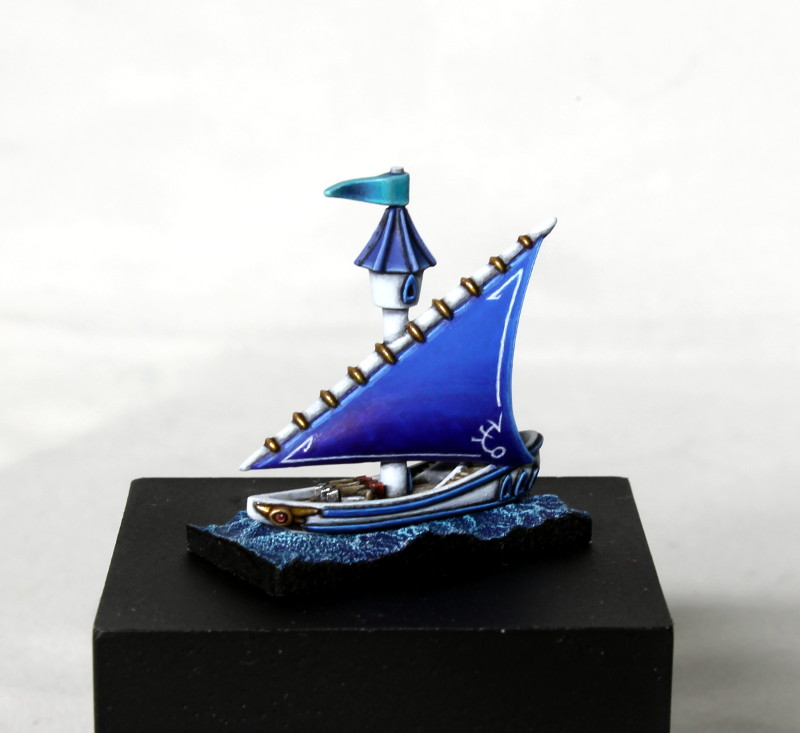 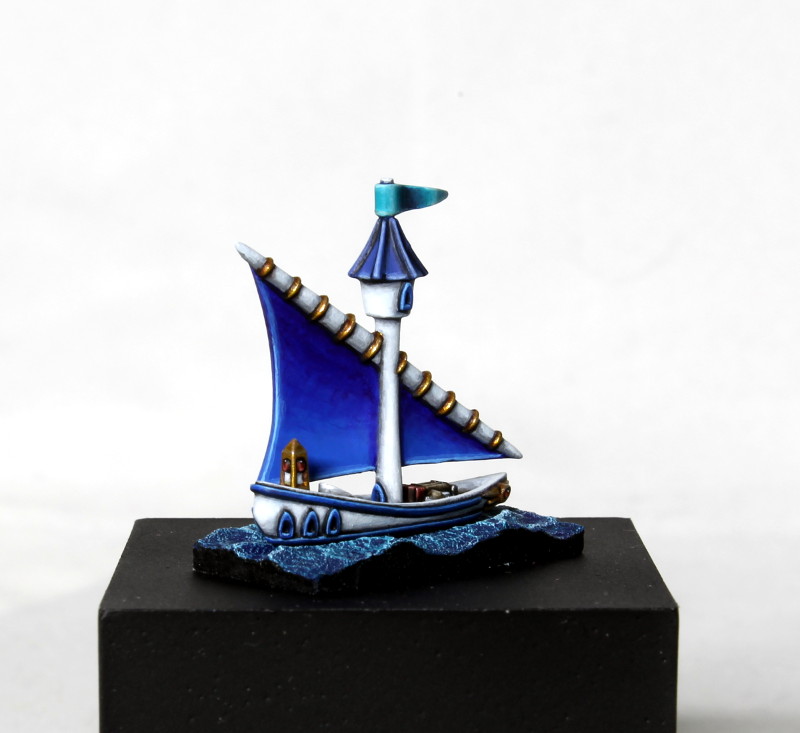 I’m really happy with the way the details printed in the high def acrylate material (I’ve learnt that this is actually an Envisiontec machine, though apparently not their highest quality). And I’m pleased to report that the sea base experiment was very successful. So there will be more to come!

At the moment I’m not too sure what I’ll do with these ships – I’m enjoying the happy memories of Man O’ War that working on them is bringing back. I know Ganesha has a set of naval rules (Galleys & Galleons) with a fantasy supplement (Fayre Winds & Foul Tides) that it might be worth me getting hold of, as I really like their approach to rules writing. 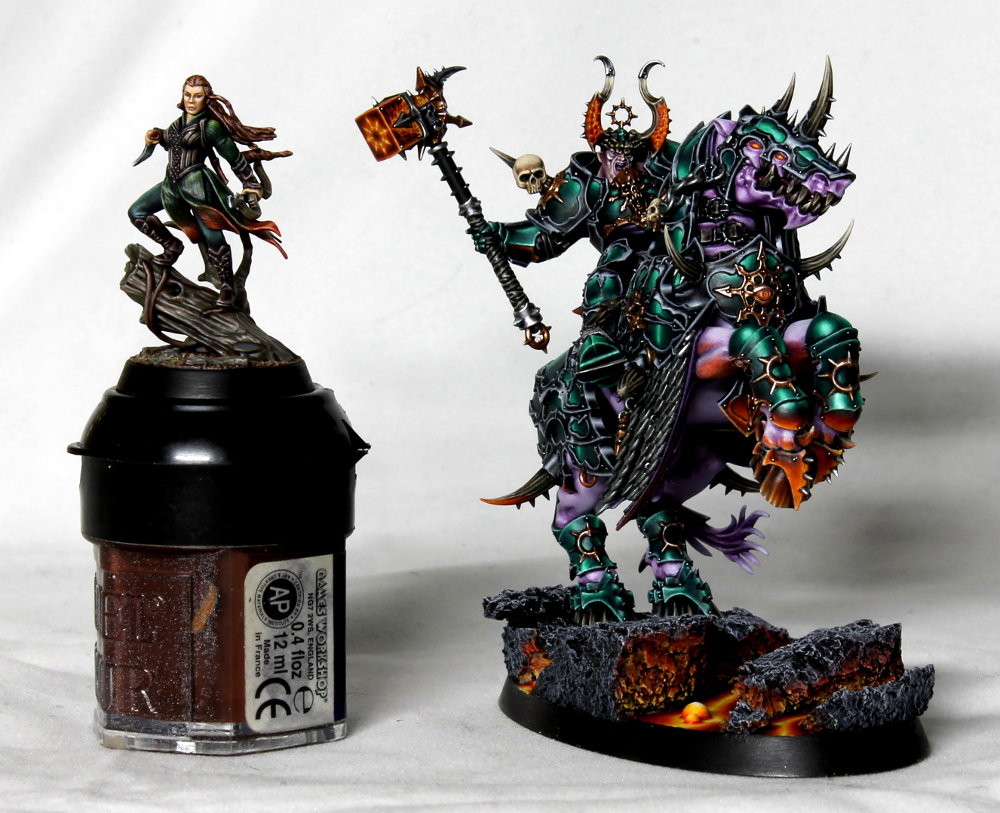 I haven’t posted for a few weeks simply because I haven’t made as much progress with current projects as I’d hoped. The Varanguard has reached a fully assembled state… and stalled. Partly this is because I fell into my old trap and didn’t plan as thoroughly as I should have done. Consequently I’m underwhelmed with the effect of the lighting coming from the lava (in my head it just looked so much cooler!) and one or two other things. But I’ve realised that really the problem is more to do with scale.

The Varanguard is big. It’s difficult to get a true sense of it from pictures but I placed it next to a pre Age of Sigmar cavalry model (a High Elf Dragon Prince) and the difference is startling. The overall surface area that needs painting is vast in comparison, and of course this means that it takes far longer to complete the project. For this miniature there are also a great deal of details which add to the time needed.

There was a time in the not so distant past when I would have been prepared to plough 100 hours into a single model, but these days I find my willingness to commit to projects of this nature greatly reduced. I think this has a lot to do with the fact that I’m no longer chasing competition glory but just painting for the fun of it. Beyond a certain point I tend to get bored with a miniature and want to move on to the next thing. With the motivation of competition I was able to push through this and on to completion but if I’m painting for fun and it’s starting to become not fun then what is the point?

One possible solution to this conundrum would be to back off on the quality a bit to reduce the painting time. But I know that when I do this I’m inevitably unsatisfied with what I’ve produced. So this is a non-starter (although the Varanguard will probably end up getting this treatment just so I can get it off my desk). The only other possibility I can see is to work at a smaller scale so that I can indulge my perfectionism while keeping the total project time down to a manageable level.

I had a lot fun last year painting my own 15 mm sculpts, and this is something I’d like to do more of in the future. On those minis I could really go to town, painting everything in non metallic metal and even getting in some bits of freehand while still keeping the total time per mini to 10-20 hours. However, I have to concede that such diminutive miniatures just don’t have the impact of larger figures. I’d also like to be able to paint something without having to sculpt it and get it printed first!

Over the last couple of weeks I’ve been painting up a Tauriel from the Hobbit line, and I’ve come to the conclusion that this sits right in my sweet spot for scale. It’s a lovely sculpt, and the face in particular is better than I had thought from the box art (although I still need to tidy it up a little). The project is nearing completion and I’m not sick of looking at it yet despite pushing myself to the limit of my ability.

So I think that’s the answer for me – in the future I’ll be focussing again on single miniatures on foot when it comes to painting. It’s just a bit of a shame that there are so few LotR/Hobbit characters available in plastic because I really don’t like dealing with all the imperfections that come with resin and metal! I think I’ll be ok going up in scale to the smaller Warhammer miniatures, but I need to test that. This will open up a much larger range of possibilities but I worry a little about the trend towards huge character models that GW has been exhibiting recently. Don’t get me wrong: they’re fantastic miniatures, absolutely brilliant sculpts. They just don’t fit into my hobby at the moment.