Another week goes by and some more progress on the librarian. 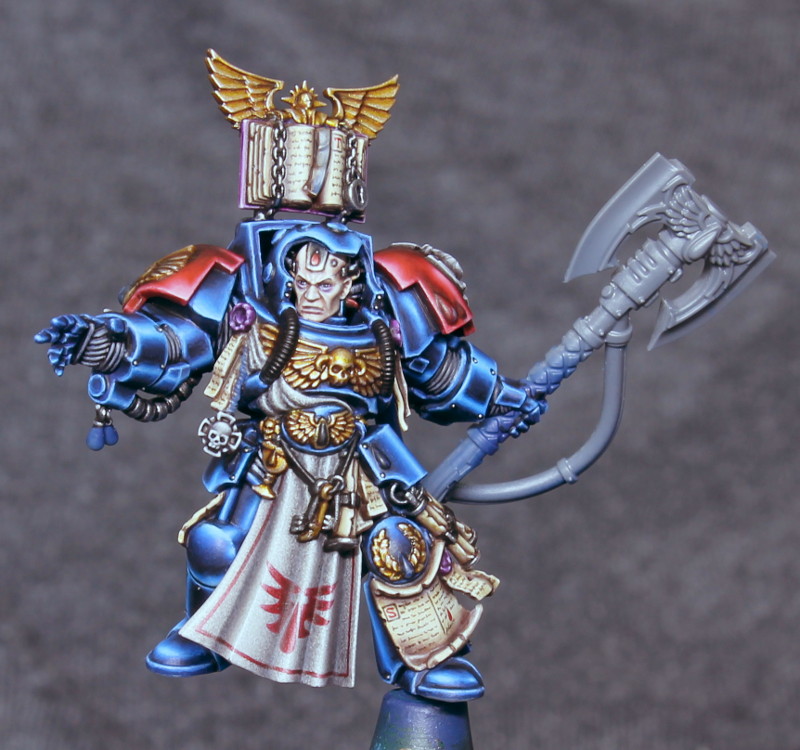 I’ve finished up the glazing on the blue armour and moved on to the red. I used the citadel reds here – it brought back happy memories of the hundreds of hours I spent on my blood angels diorama a couple of years ago! The base coat is mephiston red, then I highlighted with a mix of evil sunz scarlet and white, then again with more white. To shade I just added abaddon black to mephiston red. Then lots of glazes with mephiston and evil sunz.

I plan to go back to tidy up the armour a little more towards the end of the process and apply some final spot highlights. I think the lighting/camera has done something funny to the red armour in these quick pictures too – the transition between red and shade is definitely more gradual in reality than it appears here! Gah.

I’ve elected to go with true metallics on this piece rather than non metallic metal. I think it’s fair to say that the combination of this kind of shiny armour and true metallics is a bit of a marmite style. Personally I like this approach as the shinyness gives the miniature some extra impact in the hand but I have to admit that it doesn’t photograph as well as non metallic would.

Plenty of parchment on this guy. After all, he’s a librarian so it makes perfect sense that he’d strap parts of his library to himself before heading into battle. 😉 For this I base coated with creamy ivory (reaper) over an initial layer of creamy ivory and khemri brown to help with coverage. Then I shaded with rhinox hide and a little black before highlighting with some white added to the ivory. After I painted on the text squiggles (a mix of rhinox and black) I used a wash of gryphonne sepia to yellow it up and increase the difference in colour with the robe a bit more.

Not too much more to do now, although I’m sure the final stages will take twice as long as I expect as usual! I should be able to get onto the axe this week. 🙂